For the first time in quite a while, I finished a game jam entry this last weekend.

It's not the most polished or the most balanced, but the important thing is that I actually released it.

I've lost count of the number of half-baked and half-finished prototypes I have lying around, so it was important to me that I actually release something this time.

If you get a chance, please try it and all of the entries to the Shacknews Jam.  So far, I'm partial to "Run Don Run."

The first hurdle to releasing Electric Eye as open source has been jumped over: my curved screen correction system received a patent.

Next step is finishing up the current bugfix and getting that into partner's hands, and then I can restart the internal open source process.
Posted at 10/26/2017 06:03:00 PM

When I woke up this morning, I noticed that there had been a power outage while I slept.  When I went to turn on my main rig, all the fans started up, but I didn't even get a beep code.  The last time this happened to me, it was because the motherboard had failed.

I've had this machine for about two years, so it was time for me to upgrade anyway.  My new machine should arrive in about a week, but I'm going to be on my Mac Mini for the next week or so.

Now have a Unity Plus license for the next year.

There's a Game Maker's Toolkit Game Jam starting tomorrow and I'm going to try to livestream my attempt at participating.

I'm going to set up a simple test stream tonight and if all goes well, I'll post the stream links in a new post tomorrow night.  I'll be participating from 6pm PDT Friday through 6pm PDT on Sunday and will put my final bits up on itch.io.
Posted at 7/13/2017 10:39:00 AM

First, the good news.  It looks like RTResolution v0.2 properly handles all of the stock use cases.  Yay!

Now for the not so good news.  It looks like TModLoader doesn't quite like RTResolution.  If so, not that much of a surprise.  Getting mods to work well together isn't exactly easy.  Ask the Skyrim modding community...

I don't have an extended weekend coming up like most Americans, so I'm going to be spending the next couple of evenings digging into TModLoader and what's going on when it gets patched with RTResolution.  One of three things will happen as a result:
Stay tuned.

Update 6/30/2017 5:06pm: TModLoader moves all of the rendering code over to a method called do_Draw.  The crash is happening because I don't modify do_Draw.

This build does only two things for Terraria 1.3.5.3:
This build doesn't currently work with TModLoader 0.10.0.2.  The compiler version that they are using is newer than the version of Mono.Cecil that I'm using and the two don't place nicely together.  A ticket has been filed with the TModLoader team.

Next week, I have to fulfill a summons for jury duty so I may or may not be working on any given day.

On June 25, I'm going to be a wheel monitor for the Netflix float in the San Francisco Pride Parade.

To clarify, the only thing that this mod does is remove the forced minimum zoom level in Terraria.  If you open the options and the lowest value for zoom is higher than 100%, this will let you set your zoom to 100%.

Note that this currently requires that you have the .NET Framework 4.6.1 or higher installed.

The most common complaint appears to be this not running or appearing to have crashed on run.  Rebooting, then running RTResolution again, appears to fix this for the vast majority of users.

I have returned to the Bay Area and will resume work on RomTerraria tomorrow afternoon.

Tonight is reserved for something else... 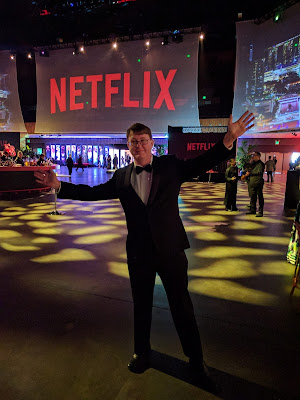 Will be flying back home tomorrow where I will have access to my development environment again.

Out Of Town Until June 8

I've been spending a few hours a night working on the two successors to RomTerraria.

RomTerraria is going to be split into two separate programs.

The first is going to be called RTReach.  This will allow you to switch the XNA profile from HiDef to Reach and back on various executables.  This will allow people who were able to run Terraria pre-1.3.5 to run it again.

The second is going to be called RTResolution.  This will do two things and two things only.  First, it will unlock resolutions higher than 4096x4096.  Second, it will (hopefully) allow 1:1 pixel scaling.

All other functionality contained within RomTerraria is going to be discontinued.  You can work with the tModLoader community to add back in anything else that you require.

I am not going to solicit or accept funds for this work.

Once the two mods are released, the source for them will be available on GitHub.

I'm hoping to have initial releases of both mods available this weekend, but cannot guarantee the release date.

Once these are released and the source is released, if the tModLoader team wants to integrate my work into their project, they are welcome to it.

I really want to be able to get back to working on my own games rather than work on maintaining this project, but since it seems this is what the community wants me to do...

Finally, I'll be unavailable from May 31 through June 11.

Update 5/6/2017, 3:00pm: Test release of RTReach 0.1 available.  This switches the XNA profile from HiDef to Reach so that people with older video cards who were locked out of v1.3.5.x should be able to run the game again.  Still working on the resolution unlock patch.  Had to roll back from Mono.Cecil v0.9.6.x to v0.9.5 due to some assembly resolution stuff that Terraria does.

Update 5/7/2017, 10:35am: RTResolution is mostly there.  I removed the max-4K resolution limitation and have it so that you can set the zoom to 1:1 pixel, but something else in the core game is still overriding the 1:1 pixel code.  Sorry for the delay, still working on it.

Update 5/17/2017, 6:00pm: I've been sidetracked while covering for a coworker who was out on vacation and am almost done getting caught back up.  Still working on it.

I've also finally found the code responsible for the forced minimum zoom level.  I think I can get rid of it.

Right now, there are two items that I see as being needed for Terraria v1.3.5.x.

1) The ability to revert to the XNA Reach profile.  People who have older (e.g. crap) machines/GPUs don't appear to be able to run the game anymore.  When I look at the resolution code in Terraria, they appear to still have the old non-4K limits in place if the Reach profile is embedded in the executable.  I already have the code to handle this.

Update 4/30/2017, 3:00pm: I'm working on two patchers.  The first patcher will handle number one on the list above only.  The second patcher will be resolution patching only.  Expect releases for both sometime this week if all goes well.

Update 5/6/2017, 3:00pm: Test release of RTReach 0.1 available.  This switches the XNA profile from HiDef to Reach so that people with older video cards who were locked out of v1.3.5.x should be able to run the game again.  Still working on the resolution unlock patch.  Had to roll back from Mono.Cecil v0.9.6.x to v0.9.5 due to some assembly resolution stuff that Terraria does.

Update 5/7/2017, 10:35am: RTResolution is mostly there.  I removed the max-4K resolution limitation and have it so that you can set the zoom to 1:1 pixel, but something else in the core game is still overriding the 1:1 pixel code.  Sorry for the delay, still working on it.

Update 5/17/2017, 6:00pm: I've been sidetracked while covering for a coworker who was out on vacation and am almost done getting caught back up.  Still working on it.

Well, there's no longer going to be a need for RomTerraria in its current form.

The core piece of RomTerraria (resolution unlocking) is now fully integrated into Terraria proper.  Specifically, the code I wrote to unlock higher resolutions is literally inside Terraria 1.3.5's Terraria.Main.TrySupporting8K() method.

If you are experiencing crashes with using RomTerraria with TModLoader, I have an experimental build here that might fix a specific subset of crashes.

Give it a shot and let me know.

Crashes With tModLoader and RomTerraria

I've been getting several reports of crashes when people take tModLoader and apply RomTerraria on top of it.

While the latest version of RomTerraria includes updates to handle the base cases, I'm still trying to figure out the cause of a race condition with rendering that appears to be affected by certain mods.

If you are experiencing crashes with a modded Terraria with RomTerraria applied, please reply to this post with the list of mods that you are adding. 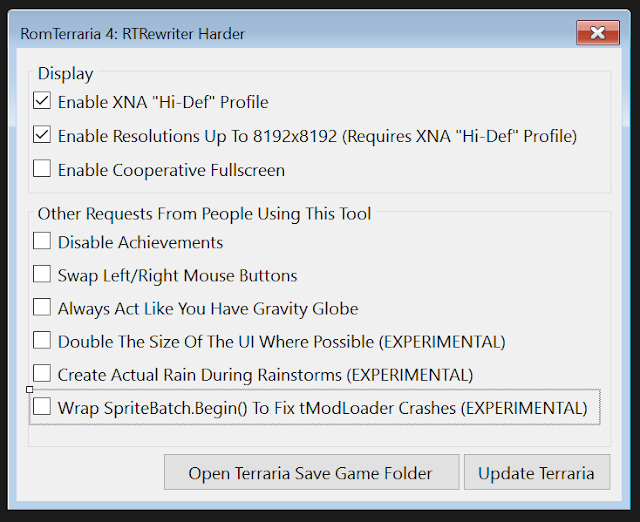 Update 4/3/2017 7:04pm: I'm still working on a global fix. The major cause of most of these problems (and crashes with non-retro lighting) appears to be assumptions about the state of the SpriteBatch object. If a mod works in retro mode, but not in other lighting modes, it's a bug in the mod. I'm working on a deeper fix, but it's going to take a bit more time.
Posted at 2/28/2017 06:39:00 PM

I need to get back to having nightmares about work.  At least something productive comes from those.

Last night, I had a nightmare about becoming a brain in a jar.

I was marched down a long hallway and when I got to the room at the end, someone behind me injected me with something that caused immediate paralysis.  I was slowly lowered to the floor while panic was setting in.

Shortly after reaching the floor, I felt a sharp pain and I felt like I couldn't breathe and that my heart was stopped.  Having my vision shift so that I was looking down on my decapitated body quickly led to further panic.  It was followed by a brief sensation of pressure on my skull and then...nothing.  No external stimuli whatsoever.  Just me, alone in my own brain with my thoughts.

Sounds like there is a rumor going around that large monitor support and UI scaling support will be added to Terraria as part of 1.3.5.  I'm hopeful.  The XNA alternative that is used on the Mac and Linux ports doesn't have the XNA texture size restriction that limits them to 2048x2048 and lower resolutions on PC, so if they just use the same codebase for Windows, all will be good.

If I had to guess, assuming nothing blows up with the retail release, RomTerraria as it exists will be retired completely come the release of v1.3.5.  I'll likely take a break from Terraria modding for a couple of months, then come back with something new.
Posted at 2/04/2017 12:36:00 PM

Blue Asterisk Instead Of Red Cross

I noticed this article on Kotaku about the developers of Prison Architect running into trouble when they used the Red Cross to denote health.  We encountered something similar back when we were developing SiN Episodes: Emergence.

If you play SiN Ep, you may notice that all of the health containers have a blue asterisk and have the initialism F.T.R.C. emblazoned on them (standing for the Freeport Trauma Recovery Center).

What you may not know was that this was a response to me forwarding an article from GameIndustry.biz to management (link to summary), and the artists deciding to put in a response that a) lined up with the color of the healing spray, b) was not in any way able to be mistaken for a red cross or red crescent, and c) was a subtle way of putting in an initialism for "Fuck The Red Cross."
Posted at 1/16/2017 06:28:00 PM