An ATA controller on a load balancer failed this morning for Shacknews.com.

Sorry I've been quiet. I've been buried in work and beta testing for VistaGameDoctor.com SP1.

In the meantime, here's a flashback to some darker times. These posts summarize the changes that we had to make to get "SiN Episodes" shipped in Germany.

WORKAROUND: The value for the property "Settings Property Name" is not valid for the current language.

Symptoms: You are setting up your DBML file in Visual Studio 2008 so that you can use LINQ to SQL, and when you try to compile, you get the following error message:

The value for the property "Settings Property Name" is not valid for the current language.

I've been rewriting VistaGameDoctor.com so that it is more community focused. It's been a bit of a challenge, but it's been worth it because I've also been using it to wrap my head around LINQ. 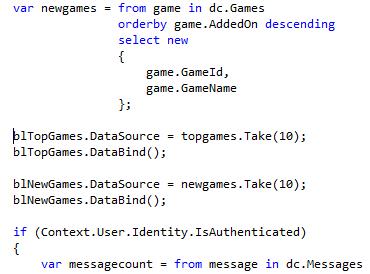 LINQ does take a bit of getting used to. For example, you can have a new item in an returned class be the returned value of a function in LINQ to SQL, but you can't pass that value of the function into another portion of the query. There's going to be some fun nested query stuff going on over the next bit.

The code is about 90% done. I'm just trying to lock down a few of the more esoteric features to allow community moderators and submissions and distinguish those submissions from ones that I put up in my normal testing.