As some of you know, Jack Thompson is a Florida attorney and is pretty much against anything that he deems "sinful." You know, sex, profanity, violence in media, the fun stuff.

So what does Amazon think readers of his book would want?

I'm glad to see that MSNBC is using the .NET Framework and ASP.NET to power their news site.

However, it might be nice if they were hiding their error messages...no need to give people too much information as to what's going on under the hood... 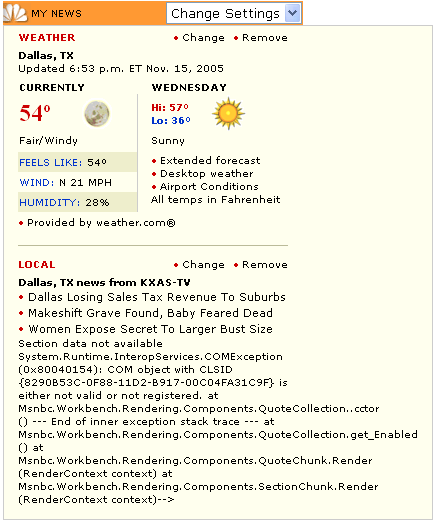 This is a brief list of what people have entered into various and sundry search engines in order to find this site over the last few weeks.

daryl welsh microsoft
Um, if you're looking for a positive reference for this guy, look elsewhere. You won't get one here.

cvar engine
I've got one for Visual Basic .NET right here. I'm working on converting it to Visual Basic 2005.

c# directsound voice
Sorry, I don't have any C# content in my blog or on my site...yet.

dungeon siege chunky cheat purpose
The purpose of the "chunky" and "superchunky" cheat codes were to dramatically increase the amount of gore in the game. It also served as a means to an "M" rating once the ESRB found out about them. The game was rerated back to "T" after their removal.

realbasic versus revolution
I did this test, and never reported back. My end decision: neither. Both are lacking quite severely in several of the areas that BASIC should be strong at, usability among them. Use Visual Basic 2005 Express instead. It's free for the next 363 days, and as long as you install before the time limit, you own it in perpetuity.

pirate s moon fixes
mechwarrior 3 pirate s moon problems
While I posted about issues I had during development of "Mechwarrior 3: Pirate's Moon," I don't have any troubleshooting info here. Sorry.

postal hostility
Sorry, I'm hostile towards lots of things, but USPS isn't one of them.

mce activex
I'm actually working on a Windows XP Media Center Edition 2005 game right now in my miniscule amount of spare time. However, I don't think that's what you are looking for.

visual sourcesafe 2005 price
Amazingly enough, this is missing from the current information on Microsoft's site. They should be slapped for this...go figure. I'm going to guesstimate $199 a seat based off of previous talks.

msdn subscription warez visual studio 2005
Hey, I'm not all that happy about the pricing either, but I'm not going to pirate the damn thing. Fuck off and die, you warezing loser.

how to access play money pokerroom.com cheats
I don't even know how to respond to this one...if anything, this schmuck is even more pathetic than the asshole looking for a pirated copy of Visual Studio 2005.
Posted at 11/09/2005 11:46:00 AM

Sorry I've been silent...the hours at work have been, well, a bit insane for the last week.

I came in to work on Thursday at 10:00am, and left Friday after dark. (Not sure what the exact time I left the office was. All I know is that it was dark and I'm glad I had a lift, because I was in no condition to do more than walk up the steps to my apartment and crash.)

I slept pretty much all day on Saturday in a futile attempt to recover from the marathon shift.

I came in for about four hours on Sunday to tie up some loose ends, then came in at 10:00am on Monday and worked for 22 hours straight. I went home and slept until 6pm yesterday, woke up, ate two frozen pizzas, played some WoW, went back to sleep at 1am, and game in to work today about 20 minutes late.

Are you working on a mod for "Quake IV" or "Doom3"? Are you getting odd script errors like the following?

If so, don't worry. Check to see if you have an empty else clause in your code.

Evidently, if you have an else clause without at least one executable statement in it somewhere in your script, your script won't compile.

A common reason for this occuring is if you use sys.println() to dump debug spews to the console. You may end up with a code snippet like this:

If the above else is in your script, the script will not compile because there is no executable code in that script block. To correct the problem, either remove the else clause, or comment out the else block entirely by placing a /* immediately before the else keyword, and a */ immediately after the close bracket.

Please forgive me for not updating as often as I used to...I'm currently in multiple alpha pushes and multiple gold pushes, so time is at a premium.

I've planned out a series of posts related to testing over the next two weeks and I'm hoping to write most of them this weekend.